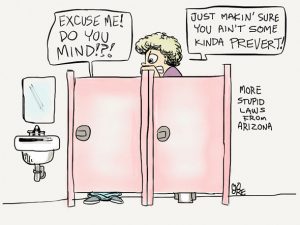 The Mulatto Messiah, drunk with power over the numerous presidential edicts he’s issued which the spineless Republican-led Congress has done absolutely nothing about, has now jumped with both feet into the current brouhaha about transgendered people — whatever THAT means — and public restrooms.

Barack Obama has issued an imperial decree — uh, presidential edict — telling all public schools across the United States that they MUST allow students who were born male — or female — but now “feel” that they should have been born the other gender, to use whichever school restroom that fits their sexual identity, at the moment. If the schools dare to defy His Uppityness, they will be subject to losing federal funds, he said.

This news flash came over just yesterday, days after I had already finished — I thought — writing a column for Corporal’s Corner on that subject. So this is what we in the newspaper business called a “new lead” to the original story. The original story follows, below. I guarantee some of you won’t like it, at all. But please read what I’ve written carefully. I’ve tried to cover all the bases.

“And if a man pretending to be a woman ever goes into MY daughter’s bathroom, it’s the LAST damn bathroom he’ll ever walk into!”

Thus speaks the outraged — and uncomprehending — American father in the midst of the current brouhaha about whether public places should allow transgendered people to use the public restroom that matches their current gender.

I’m talking about those people who have decided that they were always the opposite sex than the one they have always appeared to be, and have gone through the detailed, lengthy, expensive medical procedures which, in modern times, can transform them into the other gender — to enter the public restroom that corresponds to the gender they are NOW, instead of being required to utilize the one that they’ve used since they were old enough to toddle into it.

NOW, ALLOW ME to say up front that I do not understand why anyone would want to change genders, based on some kind of inner feeling or notion that they were somehow born into “the wrong body” than God intended. There have always been men who were, due to personality quirks, mannerisms, etc., considered “sissies”, to use an old-fashioned term which was heard often in my youth, by those who knew them. And there have always been women who grew up as “tom boys,” climbing trees and hitting baseballs like their male counterparts, rather than playing with dolls and enjoying “dressing pretty.”

These people were born with a different DNA pattern, or whatever the experts call it. They didn’t behave, or desire, just like others of their sex. But, for the most part, they adjusted to that. They lived their lives — differently than most others of their gender, in many cases — but they got on with them.

But in recent years, new medical and surgical procedures have been developed that allow those who really want to change, and are willing to spend the money and go through the inconvenience, pain, and lengthy process which will make a man a woman, or a woman a man, to accomplish the big switch. And if that’s what they want, and it’s not being paid for with taxpayers’ money, then I say, let ’em go ahead and do it.

DO YOU REALLY think that there are going to be guys putting on a dress, and a phony-as-a-three-dollar-bill wig, to try to look like a woman, so they can walk into a woman’s restroom and — and do what? Don’t know if you ever heard, but women’s restrooms have stalls, with doors on them that you can lock, and they don’t have urinals. What would the guy see that would leave your daughter forever soiled and blemished, if he DID go in there? Listen to what you’re saying, guys; it doesn’t make sense.

Now understand what I’m saying: No one should be allowed to “choose restrooms” based on some inner feeling they have — not when you have public johns that are divided by gender, as ours are. We’re talking here — or at least, I am — about people who have had the transgender surgery, who have been certified as having gone from man to woman, or woman to man. Assuming that they have, I think they should be able to use the restroom that fits their current gender. And not be viewed suspiciously as automatically being some kind of “perverts” or “pedophiles,” absent evidence to the contrary.

And by the way: Why is all the threatening and agonizing directed at men who have transgendered to become women? If you’re going to get all moralistic, what about women who have become men? There are urinals in men’s restrooms, you know. Wouldn’t the transgendered men be more apt to see something they shouldn’t — whatever you think THAT is — because of that fact?

Here’s another thing: Separating public restrooms by gender is not automatically a world-wide practice. In Europe, for example, most public restrooms are unisex. You enter; the restrooms are designed for privacy, with the usual stalls and doors you can lock from the inside, and with the urinals placed so that they are in a separate room. It works for them; and I’ve been told by a friend who lives in Europe for most of each year that it’s not an issue for most Europeans.

OF COURSE, DIFFERENT parts of the globe have different cultures, and I’m not advocating for unisex public restrooms all over the place in the U.S. Although they DO exist.

For the record, although I believe transgendering is probably here to stay, I AM NOT in favor of gay marriage, which was imposed on the entire U.S. by the Supreme Court, despite having been rejected in every referendum that I’ve heard of, in a bunch of the states.

But transgendered people being excluded from bathrooms corresponding to their present gender, is silly — a tempest in a teapot, over nothing. It reminds me of the fact that the fanatically over-protective dad of a teen-aged daughter is a staple element in American comedy.

Picture this: The dad is pacing the floor, so mad he’s about to burst; the daughter’s young suitor is two minutes late bringing Molly Bee home from their date. He was supposed to have her back by 10 p.m., sharp! When they arrive home, a minute later, Dad explodes at his daughter’s young date: “Young man, I told you to have my daughter back here by 10 o’clock!!! You explain yourself, and by God, it better be good!”

On the other hand, picture this: Dad is sitting up, reading the newspaper and watching the evening news. Junior arrives home from his date, two hours late. Dad isn’t concerned. He says, casually, “Well, son, how did it go?” The son, all excited, exults, “I got laid twice, Dad!”

“Atta boy!” the father shouts, laughing and pumping his son’s hand. Then he looks around a little nervously and says, “Did you remember to use a rubber?”

← Jacob and Marge: A match made ‘on the ground’
‘The Cute One’? How about ‘The Musical Genius’? →

3 comments for “Transgenders and restrooms: Are they kidding?!”