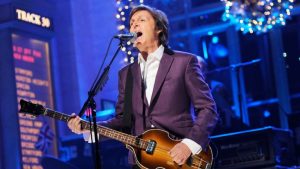 “The Cute One”? That’s how Philip Norman saw the Beatles’ Paul McCartney for many years.

Paul McCartney was simply the best-looking one, the one who all the girls wet their pants over, the one who wrote “silly love songs” with no substance — musical fluff. And, oh, yes, he played the bass guitar.

It’s no wonder that McCartney, when referring to the book, always called it “Shite.” That’s British for “shit,” in case you didn’t figure that out instantly.

NORMAN DOUBLED DOWN on his disdain for McCartney when he wrote “John Lennon: The Life”, a few years later. He did contact McCartney’s office, out of courtesy, to inform him that he was going to write the book, and, to Norman’s surprise, Paul himself returned the call. When Norman ventured to guess that McCartney would not agree to an extensive interview, McCartney said he was right, since if he agreed to be interviewed formally, it would appear that he was rewarding Philip Norman for “all the bad stuff you’ve written about me.” But he did agree to provide certain information about the Beatles that had never been revealed before, to Norman — but not to be credited as such.

The Lennon book was a literary and popular success, so in 2012 Philip Norman decided to do the ultimate to redeem himself from the unfavorable picture he had painted of Paul McCartney in “Shout”. He contacted McCartney’s office to inform the megastar of his intentions, and to say that he hoped the former Beatle would give him “tacit approval” to do a biography of McCartney, as an accompanying book to the Lennon one. McCartney was on tour in the U.S.at the time, but a couple of weeks later Norman received the much-needed “thumbs up” from him via e-mail.

The result, published this year, is a masterpiece biography of the most successful musician of all time — Paul McCartney, the “brilliant one.”

Of course, most of the straight-out narration of his life has been reported be 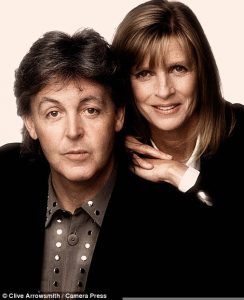 fore, in other biographies, Beatles documentaries, newspaper and magazine features, and the like. His birth in Liverpool, England, in 1942 (his birthday is coming up June 18), his and his younger brother Michael’s youth in a loving family where his father, James, and his mother, Mary, a cotton salesman and a registered nurse, respectively, made up for skimpy financial resources with careful rearing of their sons and with a heritage of wholehearted enjoyment of music (Jim McCartney once had his own jazz band, “back in the day.”) Paul learned to play the piano early in life, with it becoming almost a reflex action when his father’s large family would gather at the McCartney home and indulge their love for tunes.

NORMAN TELLS US of Paul and Michael losing their mother to a sudden illness when they were just 14 and 12; of their father’s overwhelming grief at her loss — and of his courageous recovery, going on with his life as the only parent for his two sons.

Mary Mohin McCartney’s death probably triggered a latent, inborn ability in Paul — the ability to lose himself, and his grief, in music. His dad bought him a guitar, he quickly learned to play rock ‘n’ roll music, next year got to know a slightly older teen musician named John Lennon — and the beat goes on. The rest is history: The Beatles, the greatest rock band of all time, who re-wrote the rules for the most popular young people’s music in the world.

And after the Beatles broke up in 1970, bedeviled by disagreements over their music, their management, personal differences — the usual reasons that many rock bands disintegrate — Norman tells us how Paul overcame an initial period of depression, heavy drinking, and aimlessness, and, with enormous help from his beloved wife, Linda Eastman McCartney, began building a solo career with a new band he named “Wings.”

Norman brings us right up-to-date, with chapters on Wings’ rise — and fall; McCartney’s rather fallow 1980s; his recovery, again, as a solo performer with sidemen; his exploring of other types of music; and his knighthood bestowed by Queen Elizabeth II in 1997.

AND THEN HE had to undergo possibly the most devastating of the losses in his life: his lovely Linda died of breast cancer in 1998. Norman relates how McCartney and the couple’s four children — Heather, Mary, Stella and James — dealt with their grief, then got on with the rest of their lives. In a line from another source, Paul McCartney is quoted as telling his children: “We won’t get OVER it; but we will get THROUGH it.”

As he had when his mother died, and when the Beatles broke up, Paul McCartney suffered through it — then emerged back into his career, burying his grief in his music. He is still doing live shows to this day. And they’re ALWAYS packed, with wildly enthusiastic people of all ages.

And he stays on the stage for the ENTIRE three hours, or close to it, of every show. While his (much younger) sidemen take a break halfway through, he perches on a stool on the stage, chats with the fans, and sometimes spices their person-to-person contacts by singing and strumming one of the many, many popular songs from his career.

Paul McCartney has been a loving husband and father, a good friend to many, many people, one who has worked tirelessly to aid a number of charities over the years. But most important to people all over the world, “Macca,” to use a childhood nickname which has become universally known, is an entertainer. He was born to sing and play — and write his own songs — as surely as Rembrandt was born to paint, or Beethoven to write symphonies, or Einstein to make huge scientific discoveries.

MY OWN PERSONAL opinion? Paul McCartney was — is — the greatest all-around musician of the 20th Century.

And — not to make this column excessively long as I sometimes do — the book caused me to wonder: Why did so many of the music critics love to praise John Lennon and his music, and hold Paul McCartney and his, up to ridicule of various kinds?

My personal opinion is that it was because they so often saw Lennon as courageous, outspoken, cool, clever, witty, etc. With McCartney, they saw a young man with good manners, a diplomatic way of dealing with people, a wink and a wave to the crowd while Lennon often would pull a grotesque “gookie face,” a la Harpo Marx. They saw Paul as “uncool.” But he was just as geniunely himself, as was John Lennon.

And I think another thing was, Paul McCartney just made it look too easy. He could dash off a new song in an hour or less (Irving Berlin has been quoted as saying that it often took him an entire night). His melodies are unmistakable, if you’re familiar with his work; but yet, they don’t “all sound alike.” When he sang, he could sound like Little Richard, or Elvis, or Rick Nelson — but most often, himself. And another element of his genius, probably the least well-known? He is one of the greatest bass guitar players of all time. His bass lines gave a perfect “backbone” to the Beatles’ music, and helped make it unique.

← Transgenders and restrooms: Are they kidding?!
BREXIT may signal a coming revolution for America, too →

2 comments for “‘The Cute One’? How about ‘The Musical Genius’?”