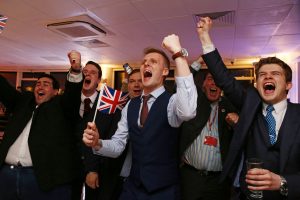 Maybe 100 years from now they’ll be talking about June 23 as the British people’s “Fourth of July.” Because in a referendum on that date, the people of the UK voted that their answer to “EU” is “pee-u,” and they want out of the European Union, the sooner the better.

Remember how we said that to the British in 1776? Somehow people the world over eventually get tired of being lied to, condescended to, lectured to, by highly-paid, well-protected government moguls who (obviously) know much better than the average (fill in the ethnic blank here) does about how said hayseeds should live their lives, how many swarthy immigrants should be allowed into the country, what kinds of sensible business and educational measures constitute “racism,” “zenophobia,” “Islamobia,” ad nauseum. The British told the EU nabobs, in effect, “Stop lecturing us; stop telling us we shouldn’t have national borders; stop trying to run our lives. Bend over and kiss our bums!” That’s British for “asses.”

The British establishment was “gobsmacked,” to use another UK slang term, by the rejection of EU membership by the unwashed masses. “How dare they?! The polls said ‘Remain’ was going to win! These ignorant fools had no idea what they were voting for! We’ve got to start a petition to have another referendum so we can do a more thorough job of brainwashing these racist, islamophobic idiots so THIS TIME they’ll vote the way they SHOULD have voted in the first one!”

Lord Somesuch, supposedly a British nobleman who spoke on Fox News (couldn’t quite figure out why he had an obviously American accent), referred to those who voted to leave the EU, and, by implication, those who are supporting Donald Trump’s campaign for president of the United States, as “the Archie Bunker crowd.”

NOW, FOR THOSE of you too young to remember, “All in the Family” was an American TV comedy series from the 1970s about this working-class New York City guy who was supposedly ignorant, racist, xenophobic, and everything else not approved by the liberal establishment.

“Archie Bunker crowd.” Think about that. Did you ever hear a more sneering, condescending, looking-down-the-nose remark? Directed at the White B 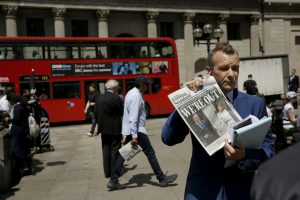 ritish working class and lower-middle class millions who voted to “Leave,” of course. British commentators with enough impartiality to acknowledge it, and enough intelligence to see it, have commented that this kind of attitude, coming from the EU big shots in Brussels, is one of the big reasons that the British man-in-the-street wants to leave the European Union’s clutches.

You see, the (appointed) members of the EU parliament are mostly failed politicians who want to be able to ride high again, to dictate to their “social inferiors” about things like, oh, let’s just pick an item at random: IMMIGRATION!

In their view, we are all equal as human beings, in every way, so millions of Muslim immigrants — and others, such as blacks from the West Indies — should be welcomed into Europe with open arms because they’re (supposedly) “fleeing from ISIS.” OK, a lot of them actually are. But infiltrating potential terrorists into those hordes of Arabs would not be hard at all for ISIS. Aided by foolish European leaders like German chancellor Angela Merkel, the EU potentates have succeeded beyond their wildest dreams. Muslims wanting to live under Sharia law, and their mosques, and all the problems that always come with them, are now scattered hither and yon across Western and Central Europe.

So, despite demands by some of the “Stay” moguls that another referendum be held, because the “stupid common folk” didn’t understand what it was all about, it seems likely that Britain is bowing out of the EU. Europe got along without EU for hundreds of years; why all of a sudden is it so important now?

WHICH BRINGS ME to the second part of this column: What does all of this have to do with the U.S. and our lives?

The answer is: As the British people are sick of the EU’s condescending ordering of them around, the American people — an important, basic element of us, anyway — are sick and tired of a (mostly liberal-leaning) federal government which wants to make sure that the individual 50 states cannot, on certain issues, “paddle their own canoes,” so to speak. States that were part of the Southern Confederacy cannot, by federal law, make changes in their voting laws without prior approval by Washington. On many other issues, states that defy the federal edicts — such as the Supreme Court’s imperial decree that we all have to take gay marriage and like it, whether we want to or not — can lose their federal highway funds. Or maybe even face federal prosecution. “Busing for purposes of school integration” was imposed on countless communities by either federal fiat, or by royal decree (a little lower than imperial) of federal judges. The White people didn’t want it, and I suspect a lot of the black people didn’t, either, although of course they faced pressure from within their communities not to say so publicly.

The federal potentates don’t want us making our own decisions on certain things, because we might make the WRONG decisions — see? The federal government and the Supreme Court have spoken! We must obey! Or else! That’s what Washington thinks, anyway.

Both the majority of the British people, and also of the American people, are sick of the lies, the attempts to intimidate them, the condescension, and the hypocrisy that comes out of Brussels, and Washington, D.C. They’re sick of being told that being concerned about hundreds of thousands of Muslims filling British cities and raising the violent crime rates; and that getting outraged about blacks killing hundreds of their own race in our inner cities, to little press coverage, but one black’s being shot fatally by a White officer is a cause for protests, riots, etc. — they’re all sick of being told they’re “Islamophobic” or “racist” for being outraged at how their central or federal governments have foisted all this on them.

To sum up, with all this anger and discontent in this country (not to mention Europe), I cannot understand how the pollsters, and the pundits, can be so cocksure that Hillary Clinton is going to waltz right into the White House; that Donald Trump is hated by everyone, and doesn’t have a chance. She’s the one who’s saying, “I’ll be a third term of Barack Obama. And everything’s just fine in this country.” He’s the one who’s saying, “This country is a godawful mess. If you elect me, I’ll shake things up in Washington, and make America great again!”

ON SECOND THOUGHT, I know why these liberal media types are acting like they think Hillary has it all wrapped up. They’re trying to convince everybody that it’s all over but the shouting. And why? Because they’re SCARED. Their worst nightmare is Donald Trump coming to power. And they’re afraid they see him coming down the road … closer … closer … closer …

← ‘The Cute One’? How about ‘The Musical Genius’?
Black Americans having another ‘pity party’ →

2 comments for “BREXIT may signal a coming revolution for America, too”